In 2009, Nordmedia, the film funding society from Niedersachsen (a county in Germany) honored me with the funding for a screenplay. As I can't write short stories I wrote a big one for the silver screen, meaning cinema size.
However, this time it is an unusual story for me. A drama. A man between two women (OK, that is my style), but not action or fantasy this time, but a love story. He is a photographer and she is a dancer. When he meets a former love (that's the bitchy one), he is in trouble and she starts to fight for her love. Well, classical two dogs, one bone type of story telling... but at least full of emotion. Oh, and why is it called Rolling Thunder? Because he's in a wheelchair...
Eingestellt von Unknown um 8:49 PM No comments:

I like "telling names" for my stories. For SACRED I used names like DeMordrey or Shaddar for the bad guys and for RUNES OF MAGIC Brian Galart which has a sound of jelly, being slimy etc..
For my novel FarCry 2 - Blutige Diamanten (*Blood Diamonds) I did some research on African names and what they meant. 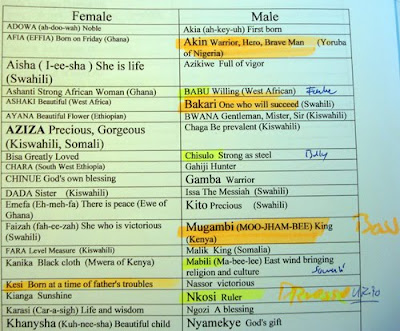 What you see here is my original document with the final names. You'll find Mugambi, the third warlord, as well as Chisulo, the former-mercenary-turning-good-guy as well as several other characters. Well, note the lines behind the names and you'll find that attributes within those characters...
Eingestellt von Unknown um 9:24 PM No comments:

Fellow Game Designer Daniel Dumont created Port Royale 1& 2 and the first Tortuga part. Now, his specialty was (and still is) creating very complex historical trade simulations, which only he can do (my deepest respect, Daniel!). Thus the concept of sea battles was one to be viewed from a God-like position and from the very distant.

Early press shot for Port Royale 2 (Design by Daniel Dumont)
Now, as I was asked to create the game design concept for Tortuga 2 - Pirate's Revenge (a midprice title announced for 2005 and which was released as Tortuga - Two Treasures in the end of 2007 as a triple-A-title). Anyway, I had a different approach as I come from action and fantasy. The first thing I did was bringing the camera closer, because I wanted to create a cinematic feeling like we knew from famous movies like Pirates of the Caribbean. 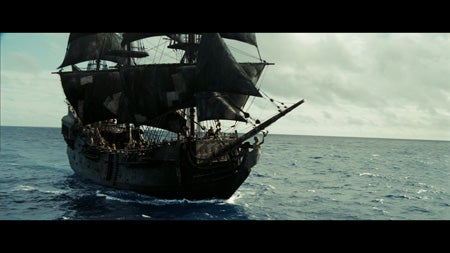 Shot from Pirates of the Caribbean (2003)
From this idea I developed a concept of three camera positions to provide overview and to experience the full and close sea battle feeling, which looked like this. 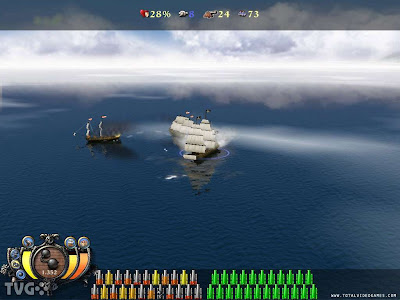 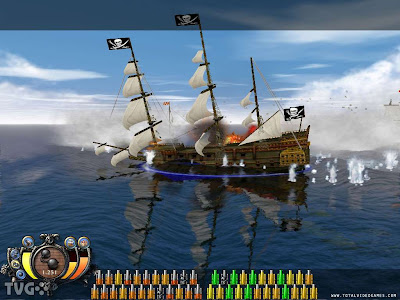 Official press shot for Tortuga 2 in 2005
Several things had to be done here. A skybox was needed and the water needed to be redesigned (we created four interferencing wave types to get an almost natural look). The game concept I had in mind was the answer to the question how do you navigate and fight at sea?
The simple answer is: You drive in one direction, bring you ship about and THEN you fire to the sides. It's not like in a combat flight simulator, where you fire in the same direction where you are heading. With this pattern the whole team started a thrilling game design concept, where you implemented a lot of cool features like time-doistorted firering patterns of the gunnery crew.
I remember our Lead QA say "This is the best sea battle ever created in this company!" Unfortunately some of the former department heads were pissed of by that statement and saw that completely differently. So they interfered in a way where one can only say "Love it (never!), change it (not possible without killing some jerk, which is illegal and therefore no option!), or leave it". Well, I decided to leave that company.
The lesson to be learned for these guys was hard, because in the end they blew that title, doing too many redesigns with a number of good game designers on the cost of the title, the creativity and of the company: they broke after blewing SACRED 2 as well (because there they did the same)!
The tragic thing is: Those department heads put a lot of good developers to the street, because of wrong decisions they made. So, the lessons to be learned are:
Well, what a bitter-sweet Pirate's Revenge that is...
Eingestellt von Unknown um 8:58 PM No comments:

About the climbing-topic in my novels

In my stories my heroes are often forced to fight, to fence, dive with SCUBA-gear, jump from high cliffs etc. Well, I did some of those things in real life (but not enough and so I still want to do such interesting things (OK, landing a Space Shuttle might be a little bit out of reach;-)) 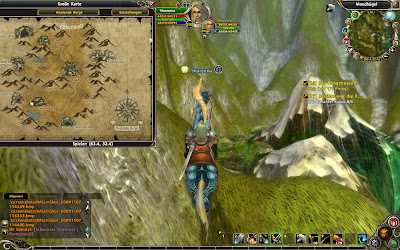 If you've read my novels, you might remember sequences where one of my heroes has to climb freestyle over solid rock, be it Jack Carver, the vet Paula or lovely Shareena. You'll found descriptions of how the rough rock felt under the fingertips or how they experienced the overall landscape surrounding them... 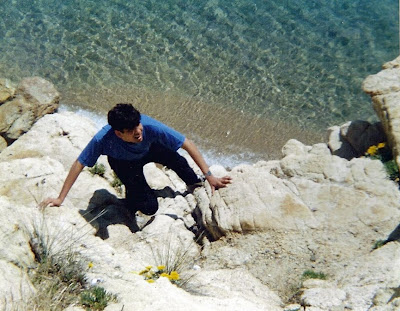 Michael T. Bhatty climbing, 1986
Those descriptions came from experiences like this one, a trip to Costa Brava, Spain in 1986, where a friend and I saw a cliffside and decided to climb there (Why? Because it was there!). I still use those experiences for inspiration, memorizing the flair, the wind in my hair and on my skin. So, as an author I am able to relive those thrilling moments... This is what makes writing fun for me.
Eingestellt von Unknown um 8:17 AM No comments:

The large bookstore Thalia in Osnabrück initiated an "Autograph Session" with me. So, you can get your FARCRY and RUNES OF MAGIC novels signed:-) 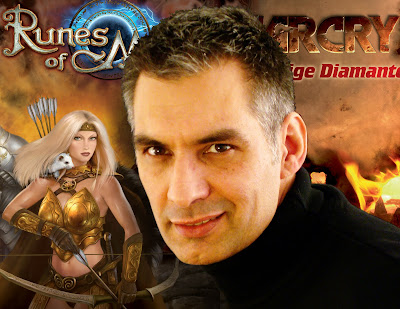 Games: SACRED - Home of the Seraphim

In SACRED the angel-like Seraphim play an important part. They are some sort of female Paladins - Jedi-like - fighting monks, only a sexy version of them. What you see below is the stronghold of the Seraphim in Icecreek Dale, build by - if I remember correctly - Markus Häublein, the level designer for this part. 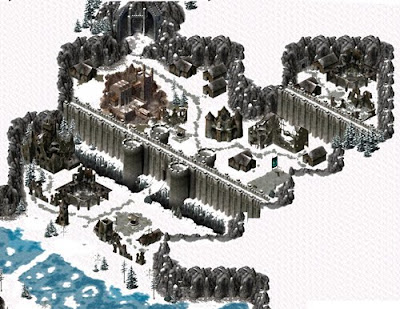 I created a skribble in late 2002/ early 2003 on isometric paper (homemade, note the sloopy lines;-) to indicate what it was that needed to be build. 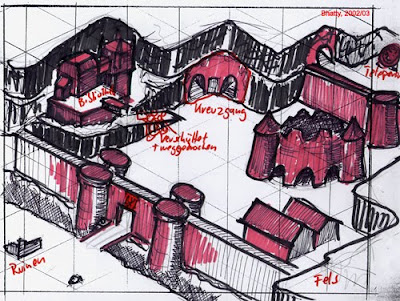 Also I presented the level designers images of mountains, rivers and ice and demanded to think "organic". They should learn what nature does, how water flows, what erosion is etc. I guess I was a pain in the ass to them, dragging them from their monitors out into the real world...
Eingestellt von Unknown um 10:49 PM No comments:

How do I work when doing a novel for a game like Runes of Magic or FarCry? Well, first I play the game of course. As a real player without cheating and then again using developer codes for immortality, teleportation, upgrades etc. Anything to learn as fast as I can about the world. 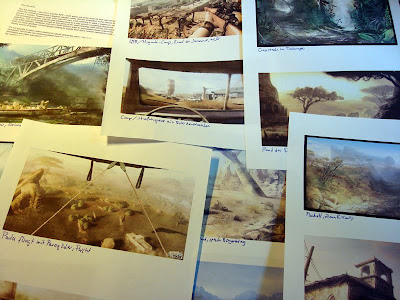 Of course I do research, read books and web articles (here about Africa) - and I use artworks and make screenshots. Sometimes looking at a shot or artwork triggers an interesting idea which I write down (here, on paper prints).

For example, the image of the bridge gave me the idea for the shootout of my heroes who have just survided the plane crash in the jungle, engaging some nasty mercenaries and smugglers, working for the bad guy.So I looked at the image again and again, using the metal, the boat, the slimy water... pure inspiration...
Eingestellt von Unknown um 10:34 PM No comments:

In the beginning of my novel FarCry 2 - Blutige Diamanten (*Blood Diamonds) the vet Paula travels with the pilot Matthew in an old JU-52 over Central Africa.
The idea for this scene came from another project were I also wrote the JU-52 into it: the game Artefact, announced in 2001 at the E3-fair in L.A., but then got cancelled as Ascaron Software went insolvent in summer 2001. Anyway, the announcement at the E3 and in TV featured parts of the cinematic sequence rendered by the Lightworks studio. The several iterations of that screenplay were written by Christoph Werner, Daniel Lieske and myself. 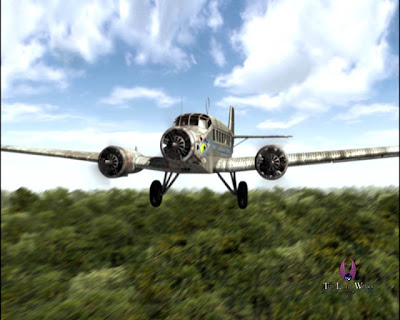 
And I should have checked my own work again, as I lost an engine in the novel, describing the JU-52 with only two engines instead of three... 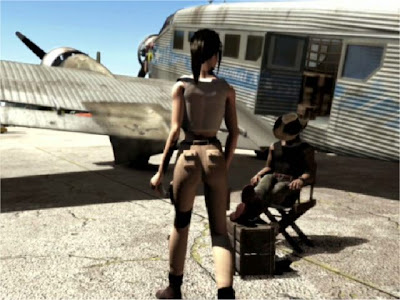 Shot from the Artefact-Intro, 2001
Anyway, look at that picture above. There is a very similar scene in my novel, only in Artefact the lady and the pilot abominate each other (in the beginning). I guess, it lies in the nature to work in circles, always coming back to themes and motifs haunting one...
Eingestellt von Unknown um 9:39 AM No comments: