It has been overdue for some time, but being a one-man-show has it disadvantages regarding time-issues. As my focus turned during the last year more and more to teaching as games professor and writing my fantasy novels, I considered it prudent to visualize this new direction on my company's page.

The major change: it's in English only from this time forward.
This is the first version, as I'll add more links for photography as well as my novels and maybe screenplay in the future.
The general idea behind this new web appearence is this: On my portfolio you'll find general information, here - on my blog - you'll find the trivia.
Why am I doing that now? Because I am - together with most wonderful artist Amy - something new and thrilling - and the new page will support it...
Well, have fun!
Cheers
Mike
Eingestellt von Unknown um 1:09 PM No comments:

Games: My student's games at MHMK, Munich, on Facebook

As you might know, I am also a professor for game design at the MHMK, university of apllied sciences in Munich.
Now the first works of my student's can be viewed on facebook: 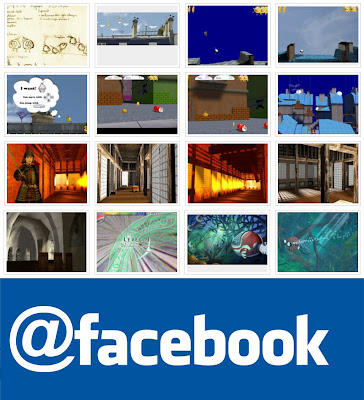 I am very proud about their work so far.
Cheers
Mike
Eingestellt von Unknown um 2:25 PM No comments:

NOVELS: A word about violence and sex in my novels, part I

I received some fan mails from my readers and there is a thing that astonished me most: mostly women!
And they wrote some tremendous mails or posts on Facebook and I am very grateful for their support. Now on the same time, when I check those online-reviews, those are mainly written by men - and they seem to have a problem with the way I describe both sex and violence in my tales.
There is one thing about violence one needs to understand: It hurts! It's not a nicve effect in a game, beautifully enhanced with some nice and floating particle effects, but it really hurts. Not just your body, but also your mind, your heart and your soul. So, if you got hit in the stomach and the face, punched and kicked, it simply hurts. And I think it is important for an author to stay true. I don't like fading out - for the sake of the reader's mind, because he can not bear it. I don't like to close my eyes. So, when I describe war, battle or assault, the breaking of bones or the torments of being humiliated I draw from experiences of people who had suffered those things, sometimes from books, sometimes from direct talks and sometimes from own experiences.
I combine that experience with the essence of drama and story telling: conflict! If there is nothign to loose, nothing really bad happening it will be all just... poooof!  I don't write poooof!
There are some devastating reviews avaible on my FARCRY novels and the style of the major complaints written by men is like "oh, it's too brutal" and "too much sex" and "please don't kill Nazis! nobody cares anymore". Well, what shall I say? Grow a pair and stand up!? My novels are not for little sissys who scream (thank's Madonna;-).
And I like my FARCRY 2 novel and the hero, Paula, the vet who had been raped as a young girl and how she goes on with her life. I also describes the civil war areas in Central Africa as it is. Cruel, brutal. This wasn't a colourful background for some 16+-casual adventure, but a book of the terrors of war.  As should the game has been... I just filled in the gaps.
I also like the way my Jack Carver from FARCRY 1 deals with fascists, because I think we have to be vigilant, as I for my part don't like to see those dark ages of the Third Reich again.
Well, what was most astonishing to me, was that the women, who have read them, said things like "Yes, this is the way it feels like! More payback!" Quite bloodthirsty those young ladies can be... But maybe they can stand more, because women suffer more pain than men. So, it seems my target group is female. If this is the way, well, then my ladies, I shall write for you!;-)
But more about this topic later when we come to the topics of desire, love, lust, passion, but also dark topics like rape and despair in my RUNES OF MAGIC novels.
Looking forward to your feedback, if you have read them...
Cheers,
Mike
PS: If you wanna check out the novels by yourself rather than reading FALSE and very subjective reviews, check them out at Amazon - there are reading exctrats available as well.
Eingestellt von Unknown um 8:58 PM No comments:

GAMES: Podcast at MHMK (in German)

The MHMK in Munich interviewed me and created a podcast. Check it out at: http://www.macromedia-fachhochschule.de/hoeren.html (it is in German only, sorry folks).

I am talking about games and why they are not just things for playing but more: a media fom of their own...
Eingestellt von Unknown um 6:37 PM No comments:

I started to create an English transscript of my novel RUNES OF MAGIC - SHAREENA by myself (well, usually translations are done by a translator, but I though I'd give it a shot).

What you can read here now hasn't been proofread so far, but maybe one day it will. Do you wanna have a first sneakpeak? Well, here we go:

Thundering Drums reverberated through the theatre of combat.


The arena – more properly a compound of many pits, excavated over the ages ago to let combatants lock in duels or to throw traitors to wild beasts – was surrounded by three rows of simple, wooden benches, allowing the spectators to gaze down into the bloodstained pits.


Men, women and children stomped simultaneously to the beat of timbales, kettledrums and djembés, those small and chalice-shaped hand drums with a membrane of stretched goat leather, and cheered at the combatants.


As if I hadn’t killed enough of them!


The gladiatrix, the female counterpart to the male fighters, did not bow. All she did was tilting her chin and extending her blade to the rear, a pose her opponent would take as a challenge rather than as a reverential gesture. The heavy muscled fighter held a brutish looking sword in his bearish hands, while he protected his face wearing a helmet, on which the forms of embossed hair could be seen, like a wild man’s mane. The embossed visor itself depicted a human face, but with lips drawn back to a sneering smile.